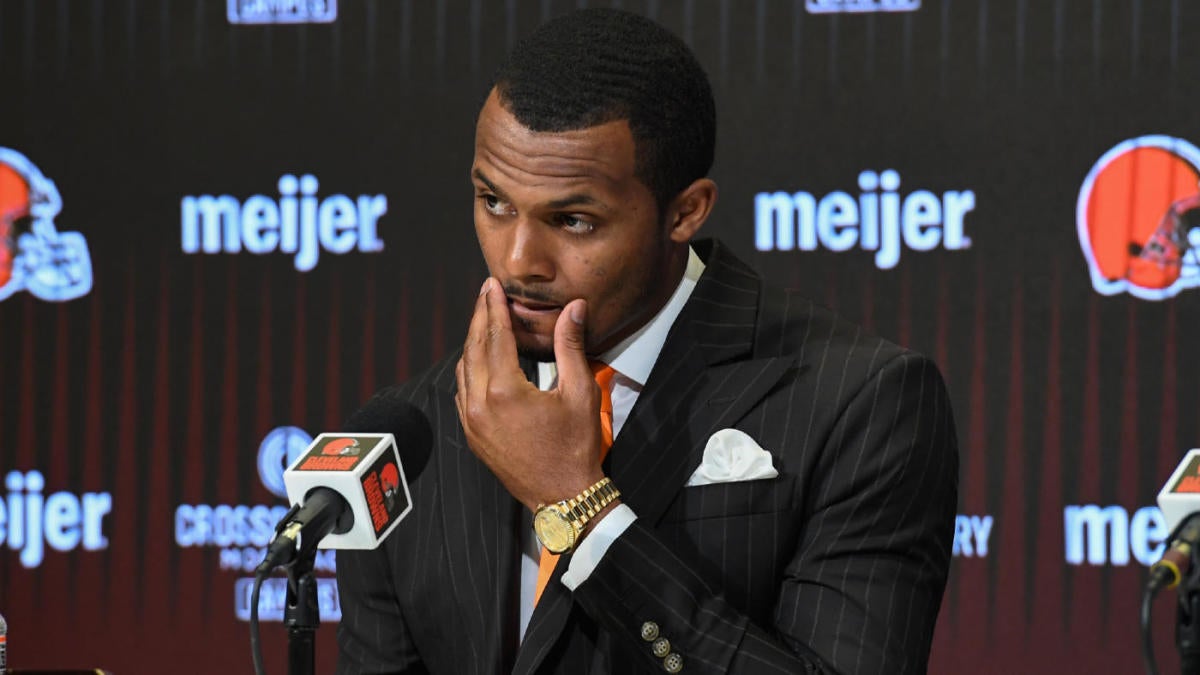 PALM BEACH, Fla. – Will the Ravens keep Lamar Jackson long-term? Will the Bengals do the same with Joe Burrow? How about Kyler Murray and the Cardinals? And Justin Herbert and the Chargers?

Those questions became a lot more profound in the aftermath of the Browns’ industry redefining contract given to Deshaun Watson just a few days ago, which they completed despite him still facing 22 allegations of sexual assault or sexual misconduct in ongoing civil proceedings and despite him facing inevitable discipline from the NFL. To call this a game-changer is a total understatement, and, as expected, it was all the talk at the just completed NFL annual meetings at The Breakers resort in Florida.

Ravens owner Steve Bisciotti said the quiet part out loud – and kudos to him for doing so – when he told beat writers who cover the team, “Damn, I wish they hadn’t guaranteed the whole contract. I don’t know that he should’ve been the first guy to get a fully guaranteed contract. To me that’s something that is a groundbreaker, and it’ll make negotiations harder with others.”

Oh, yes indeed it will. It already has.

And unless the NFL alters its funding rules, which require owners to strike a check covering all future guaranteed moneys and place it in escrow, the implications of the Watson deal will seep even deeper into future roster construction that most imagine. After fighting off the NFLPA for decades, as the union sought to eradicate this outdated funding requirement (which billionaire is going to default on a contract?), suddenly it’s the billionaires themselves who are questioning the efficiency of doing business this way.

“Do you think Jimmy (Haslam, Browns owner) fully understands the impact of what he just did?” said one league source who has discussed the impact of that deal with multiple ownership ground. “Did he stop to think what he was doing, or just plow through to do whatever it took to get that quarterback to come to Cleveland? We’ve never seen anything like this in the history of the league. It’s that impactful.”

Trust me, for as wealthy as these owners are, the idea of stashing away upwards of $200M just to complete a contract isn’t seen as good business. That’s money that they can no longer use elsewhere to help them make even more money. Can’t invest it. Can’t get dividends from it. Can’t spend it. That’s not how these cats want to roll. But suddenly the reality of MLB and NBA-type contracts is upon this league, and the overriding perception of those I spoke to at these meetings is that these owners were not ready for something this transformational.

I spoke to several people who know the owners of the teams most immediately impacted by the Watson contract quite well. People who understand their philosophies and what they believe in and how they think. And the conclusion that many of them drew was that, short of the NFL changing this funding requirement sooner rather than later, multiple generational quarterbacks will be dealt or will hit the market in the next few years. To them, it seems inevitable.

Several ownership-level sources believe that Chargers owner Dean Spanos would have a difficult time stroking a check covering what could be the $250M-$275M in guarantees required to secure Herbert’s rights for the long term. “I’m not sure that’s something Dean could do under these circumstances even if he really wanted to,” one ownership source said. Several others suggested that if they had to handicap the situation, Bengals owner Mike Brown would exhaust the franchise tags with Burrow – taking him through 2026 and his age 30 season – and draft a replacement along the way.

“With the finances of that team, and the way they are run, Mike isn’t going to trade that quarterback, I don’t believe,” said one source who has known him for decades. “He’ll keep him through the franchise tags, under these rules.”

Michael Bidwell and Bisciotti face the immediate fallout of this contract – Burrow and Herbert can’t even begin talking extension with their teams until after next season – and those I spoke to in league circles who know them believe neither will willingly embrace having to stroke such a check this offseason. They wouldn’t want to instantly embrace the new norm of a $230M fully guaranteed deal.

“It doesn’t mean we have to play that game, you know?” Bisciotti told the Baltimore media about the prospect of a fully guaranteed deal. “We shall see.”

However, I can assure you that both of those quarterbacks will want to continue this trend. They’ll be adamant about using Watson’s deal as a precursor to any negotiation with them. Duh. Of course they will. Why the hell wouldn’t they?

Jackson was already enamored with how Kirk Cousins played through his franchise tags in Washington, according to sources with knowledge of the situation – even before the market exploded this month. This new precedent only further complicates things for the Ravens. The ownership sources I spoke to believe that among Jackson, Murray, Burrow and Herbert, at least one gets traded – perhaps more – given the Watson outcome. While there may not be six, or eight, or 10 other owners eager to take on that contractual burden, while also mortgaging the future by dealing draft picks, it only takes a few, with David Tepper (Carolina), Arthur Blank (Atlanta), Stephen Ross (Miami) and the Glazers (Tampa) in a post-Tom Brady world among those being whispered about as potential suitors.

We’ve never seen transactions like this before, with much of the league trying to keep up with the Buccaneers and Rams, who went all-in contractually to try to win the Lombardi Trophy. And succeeded in back-to-back years. Draft picks aren’t valued quite as much as prime veteran talent in this league right now, with the climate changing. Never before have owners been more willing to pay the premium on dealing multiple top picks and signing those players to record-breaking deals.

“You’ve seen a real changing of the guard in terms of the aggressiveness of teams trying to get a top quarterback,” said Rams coach Sean McVay, whose non-traditional pursuit of eventual Super Bowl winner Matt Stafford punctuated this mounting arms race.

Copy-cat league. Blockbuster trades and contracts all around. Welcome to the new NFL.

All the while, agents can smell blood in the water like never before. They have never felt closer to being able to secure more widespread fully guaranteed deals. An opportunity like this has never existed before. And we’re not even two weeks into this brave new spending horizon.

“How long until there is a $300M, fully guaranteed contract?” one premier agent hypothesized. “It’s a lot closer than you think. If Watson, who may have been going to jail, took the bar to $230M, wait until you see where these other (quarterbacks) take it. Quarterback contracts are going to look like what No. 1 starters are making in baseball. The owners might not like it, and they can complain about it. But they’re making more money than ever before, too. That’s where we are now. That’s where Haslam took them. They’d better start getting used to it.”